Leaders can elicit stronger commitment and willingness to follow requested actions when they deliver messages tailored to the audience’s “psychological distance” from them, according to Stanford’s Nir Halevy and Yair Berson of Bar-Ilan University.

“Construal level theory” (CLT), developed by NYU’s Yaacov Trop and Nira Liberman of Tel Aviv University, posits that the “psychological distance” is related to differences in organizational hierarchy position as well as spatial and temporal distance.

In contrast, communications with people who work closely with each other are more influential when messages are concrete and specific.

These findings add to other “fit” theories, pioneered by Paul Hersey and Ken Blanchard’s Situational Leadership concepts, and suggest leadership behaviors are most effective when tailored to specific workplace situations,

*How do you tailor leadership communications based on the audience’s “psychological distance” and “construal level?” 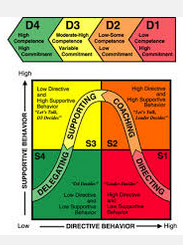 Assertive speech is assumed to signal competence and power, pre-requisites to status, power, and leadership in the U.S. workplace.

In collaboration-based work teams, “powerless” speech characteristics are significantly associated with being promoted, gaining status and power.
Interpersonal warmth and effective team skills are valued more than dominance and ambition by team members and those selecting leaders for these teams.

In contrast, “powerful” speech does not feature these characteristics, is more effective when the task or group is independent and people are expected to work alone.

As in Paul Hersey and Ken Blanchard’s Situational Leadership, Fragale concludes that communication style should be tailored to group characteristics.

Although assuming “larger” postures is associated with credibility and authority, some situations benefit from assuming “smaller”, less powerful postures to establish warmth or to acknowledge another’s higher status.

As noted in an earlier post, Women Get More Promotions With “Behavioral Flexibility”, careful self-observation and behavioral flexibility based on situational requirements are effective foundations to establish group leadership.

-*How do you monitor and adapt “powerless” speech to work situations?