The Dunning-Kruger effect describes people’s overestimate of their own expertise and unawareness of their incompetence in grammar, emotional intelligence, logical reasoning, firearm safety, debating, and financial acumen.

Cornell’s Stav Atir and  Emily Rosenzweig of Tulane asked volunteers if they were familiar with concepts like centripetal force and photon as well as fictitious terms including plates of parallax, ultra-lipid, and cholarine.

About 90% of participants claimed some knowledge of at least one of the nine fake concepts, and people who thought they were most knowledgeable also said they recognized more of the meaningless terms.

Atir and Rosenzweig concluded that low performers lack insight about their skill deficits because they ”don’t know what they don’t know.”

Some participants achieved perfect scores and expressed confidence in their answers, yet those who achieved no correct answers expressed the same degree of confidence as the most able performers.

Both high and low achievers made judgments based on intuitive “rules,” and said they felt confident because they had a clear rationale.
Williams’ team concluded, “Rule-based confidence is no guarantee of self-insight into performance.”

More than 25,000 people rated their financial knowledge and completed the 2012 National Financial Capability Study, conducted by the Financial Industry Regulatory Authority with the U.S. Treasury.
Of these, 800 respondents said they filed bankruptcy within the previous two years.

Bankruptcy filers achieved financial knowledge scores in the lowest third of respondents, but they rated their knowledge more positively than financially-solvent respondents.
Nearly a quarter of the recently bankrupted respondents gave themselves the highest possible rating, whereas only 13 percent of other respondents were equally confident.

Even 80 professionally-credentialed physical scientists at top universities provided a number of inaccurate purpose-based (“teleological”) explanations about “why things happen” in the natural world.

Scientists were equally likely as humanities scholars to endorse inaccurate arguments despite most physical scientists’ rejection of purpose-based explanations for natural phenomena.

These results suggest that most people hold pseudo-scientific explanations as “a default explanatory preference,” and could explain the attraction of myth and religion across cultures.

-*How do you minimize the risks of “Clueless Confidence”?

-*How can systematic underestimates of competence be reduced to increase “Realistic Confidence”?

Oppezzo and Schwartz coded analogies according to a protocol developed by Northwestern’s Dedre Gentner to measure:

Walking was associated with increased divergent creativity on Guilford’s Alternate Uses (GAU) and improved convergent thinking measured by Compound Remote-Association test (CRA).
This trend significantly increased when volunteers walked outside and these participants produced the most novel and highest quality analogies.

Walkers generated an average of 60% more creative ideas than when seated.
People who walked were more talkative, and their greater verbal output was associated with more valid creative ideas.

Participants generated more valid creative solutions when they walked first then sat for the next problem-solving session.

These effects may be explained by Attention Restoration Theory (ART), described by University of Michigan’s Marc G. Berman, John Jonides, and Stephen Kaplan as two types of attention:

They suggested that walking in natural environments renews directed attention and improves performances on difficult tasks even when no longer walking.
Even viewing photographs of nature was associated with improved performance on a complex backwards digit-span task.

After volunteers walked, they performed better on attentional function tasks on the Attention Network Test, developed by Jin Fan of Mount Sinai Medical School to evaluate:

Benefits of walking were not related to mood or weather conditions during four different seasons.

These studies validate Friedrich Nietzsche’s observation that “all truly great thoughts are conceived by walking” and walking in a natural setting before generating creative ideas.
Access to walking places in natural settings can enhance cognitive functioning and performance.

-*How effective have you found taking a brief walk outdoors before high-stakes discussions?

Greater emotional understanding enables people to quell the “incidental emotion” of anxiety while they focus on decisions, according to Wharton’s Jeremy Yip and Stéphane Côté of University of Toronto.

Incidental emotions that influence decision-making have been called “the affect heuristic” by University of Oregon’s Paul Slovic, Melissa Finucane of the East-West Center, Ohio State’s Ellen Peters, and Donald MacGregor, then of Decision Research.

People with greater emotional intelligence can separate unpleasant thoughts and feelings from decision making and are less likely to show the affect heuristic bias in risky decisions.

Sigmund Freud considered this ability to separate unpleasant thoughts and feelings as a defense mechanism deployed unconsciously to reduce anxiety and preserve self-esteem.
He called this experience “isolation,” contrasted with “compartmentalization,” which he defined as separating unpleasant emotions from each other.

Yip and Côté demonstrated the relationship among emotional intelligence, evoked anxiety and propensity to make riskier choices in their lab studies of more than 100 volunteers, who completed the Mayer-Salovey-Caruso Emotional Intelligence Test developed by Yale’s Peter Salovey and David R. Caruso with John D. Mayer of University of New Hampshire.

One group received an anxiety-provoking assignment:  One minute to prepare a videotaped speech shown to peers studying “academic and social standing” at the university.
The other group was given a less stressful assignment:  Prepare a grocery list.

Volunteers in both groups could choose their compensation for participating in the study: Receive $1, or take a one in 10 chance to receive $10.

In contrast, volunteers who completed the low-stress task made similar choices for compensation no matter the level of emotional intelligence.

However, people can learn emotional awareness skills to enable mental focus and contain unrelated incidental emotions, according to related studies by Yip and Côté.

They demonstrated this ability to contain anxiety when some volunteers in the speech-writing task were told they “might feel worried” because making a speech is an anxiety-producing task.
Other speech-creators received no further instructions. 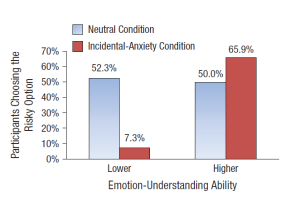 Volunteers read information about the benefits of receiving flu injections and consequences of no inoculation during flu season.
Then participants were given the option to register for nearby flu injection clinic.

The reminder that emotions were irrelevant to decisions changed previous results, by increasing the frequency that participants with lower emotional awareness chose the riskier option of not attending the flu injection clinic. 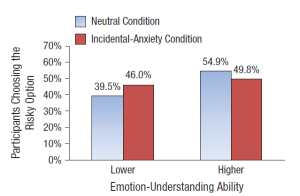 Questions that enable people to separate emotions, thoughts, and decisions include:

-*How do you avoid the affect heuristic when making decisions?