What behaviors and characteristics are associated with “Executive Presence?”

Communication, “Gravitas”, and Appearance were most-frequently cited attributes in a study by Sylvia Ann Hewlett of the Center for Talent Innovation.

Most executives described as having “presence” were men, and five “presence” characteristics were observable during initial contact:

Another typology of executive presence characteristics was identified by Sharon V. Voros and Bain’s Philippe de Backer.
They prioritized elements in order of importance for life outcomes:

University of Nebraska’s Fred Luthans and Stuart Rosenkrantz with Richard M. Hodgetts of Florida International University investigated the relationship between “executive presence” and career “success.”
They observed nearly 300 managers across levels at large and small mainstream organizations as they:

Communication and interpersonal skills elements of presence, coupled with intentional networking and political acumen enabled managers to rapidly advance in their organizations.

Differences in advancement and subordinate reactions to “successful” and “effective” managers were to differing managerial behaviors. 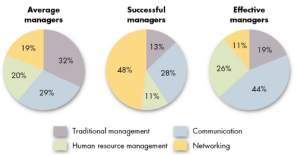 “Successful” managers spent little time in managerial activities, but invested more effort in networking, socializing, politicking, and interacting with outsiders.
Their networking activities were most strongly related to career advancement but weakly associated with “effectiveness.”

Gender differences in gravitas, communication, and political acumen may explain why men more often are seen as possessing “executive presence.”
Women who aspire to organizational advancement benefit from cultivate both gravitas and proactive networking to complement communication and interpersonal skills.

-*Which behaviors and characteristics are essential to “Executive Presence?”