Transit maps are one example of graphic displays that require the viewer to rapidly process visual information to make quick decisions in often crowded and noisy conditions.

Cognitive scientists have studied this type of challenging task load in human performance, but seem not to have been consulted when Boston’s Massachusetts Bay Transportation Authority (MBTA) sponsored a contest to redesign the system map in Spring 2013.

Michael Kvrivishvili, a graphic designer at Moscow’s Art Lebedev Studio, submitted the winning design, which was judged by aesthics and presumed usability.

Mongrels can account for peripheral vision’s generalized synthesis of information outside direct line-of-sight, which provides an overall impression while sacrificing details to speed information processing.

Their analysis recognized the many positive elements of Kvrivishvili’s design and noted opportunities for design optimization. 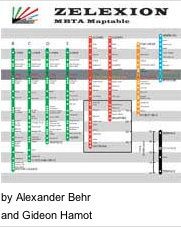 DesignEye tool enables A/B comparisons between designs and judgments about the quality of a design through simple design visualization.

Design optimization seeks to remedy effects of visual clutter, or excessive and disorganized items that can cause:

Among them are Jeremy Wolfe of Harvard’s Guided Search metrics, which measure reaction time (RT), errors, and distinguishing a single item in a crowded visual field provided an alternative to an earlier measure, “set size.”

Rosenholtz’s MIT colleagues Yuanzhen Li, Jonathan Mansfield, and Zhenlan Jin evaluated a revised version of her earlier Feature Congestion metric that focused on color and luminance contrast to consider the a new item’s distinctiveness in a crowded display to draw attention.

They also assessed Subband Entropy, a measure of visual information in the display, and Edge Density, used by University of Texas’s  Michael Mack and Aude Oliva of MIT to evaluate subjective visual complexity.

Cognitive science research focused on visual and auditory processing can be applied to optimize human performance through improved usability in many technology and graphic user interfaces.

Eric Johnson of EMC Computer Systems and a veteran of several Silicon Valley high tech companies, builds on these empirical findings and addresses the challenge of reducing visual clutter with a the ancient practice of feng shui in the workplace.

-*How do you reduce visual clutter in your work environment?

-*What cues do you seek when navigating complex systems like subway systems?