When U.S. President John F. Kennedy signed the Equal Pay Act in 1963, women earned 59 cents for every $1 earned by a man.

Today women are up to 77 cents on the dollar, according to the U.S. Equal Employment Opportunity Commission Chair Jacqueline Berrien.
She noted that the wage discrepancy is even larger for African American women and Latinas.

Women MBAs graduating from top U.S. business schools in 2012 fared slightly better than the national average, with 2012 Stanford alumnae earning just 79 cents for every $1 earned by a male grads, according to Bloomberg Businessweek’s annual surveys of 24,716 recent MBA graduates from each year’s top 30 U.S. business schools since 2002.
Given the substantial investment of time, money, and effort in obtaining these advanced degrees, women graduates may question this Return on Investment (ROI).

Women from the MBA classes of 2012 averaged 7.3 percent less than their male counterparts with average salaries of $105,059.
This wage disparity is more than triple the 2.2 percent gap women MBAs experienced in 2012 on average earnings of $83,404.

The survey considered pay differences by industries and found women lagged behind men in pay in eight of 11 sectors in 2012, including accounting, finance, marketing, and operations.
The gap has increased across industries since 2002, even in non-finance fields like information technology and entrepreneurship.

The largest pay differential was in highly-compensated financial fields like venture capital and private equity field, where women earned only 82.5¢ for every dollar men made — about 10 ¢ less on the dollar than in 2002.
In contrast, consulting offered the closest pay parity in 2012, with women earning 99¢ for every dollar of male classmates’ salaries.

Women earned more than men in three industries: human resources, non-profits, and investment banking.
The first two industries tend to attract more women and be lower-paid than other fields.

Berrien, of the EEOC, opined that with the current backsliding in parity progress, the gender pay gap is predicted to close in another 44 years, in 2057 — provided that there is no further deterioration of pay equity advancement.

CB Insights reported that in California from January-June 2010: 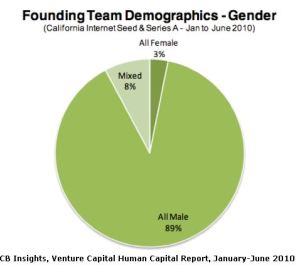 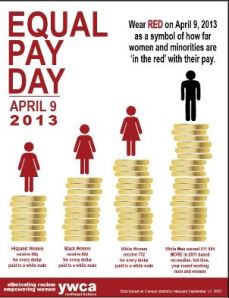 NerdWallet analyzed data from the U.S. Census for 366 metro areas to determine the lowest pay gaps for women in small, medium, and large cities, and concluded that on balance, Silicon Valley was one of the “best places for women to work.”

Wage discrepancy in one of the U.S.’s most economically viable areas, whether around the national average or well below, demonstrates that 50 years after the Equal Pay Act, the average female worker in the U.S. is far from earning an equal wage.

Happy Anniversary, Equal Pay Act of 1963, and Many Happy Returns of the day for at least 44 years, until women’s pay may be equal across industries and geographies.