Race is a changeable status marker of rather than a fixed individual attribute, according to Stanford’s Aliya Saperstein and Andrew Penner of University of California, Irvine.

“Racial fluidity” – or changeable racial categorization – influences and is influenced by racial inequality in the United States, noted Saperstein and Penner.

They analyzed longitudinal U.S. national survey data collected over two decades and found that individuals’ racial classification, both rated by themselves and by others, changed over time in response to changes in social position.

In these data, unemployed, incarcerated, or impoverished Americans were more likely to be seen and self-identify as Black, even if the same individuals were originally classified in a different racial category.

Racial self-perception and racial perceptions by others depend on social position, even though most people believe that race is perceived in facial features, such as skin color.
However, social status cues around a face systematically change the perception of race, found Dartmouth’s Jonathan B. Freeman, Matthias Scheutz of Tufts, with Penner, Saperstein and her Stanford colleague, Nalini Ambady.

Volunteers saw faces in a randomized order and evaluated them as White or Black using the keyboard, which recorded and analyzed mouse movement with MouseTracker software. 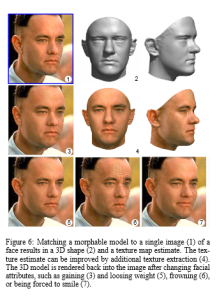 Participants rated the race of faces along “White–Black morph continua” when they saw faces with “high-status” attire (suit) or “low-status” attire (maintenance uniform).

They noted hesitation and shifting between choices when participants categorized faces with high-status attire as “Black” or faces with low-status attire as “White.”
Stereotypes interact with contextual and physical cues to shape “neutrally- plausible” person categorization, concluded Freeman and team.

“Social cognition” can influence visual perception because “person perception…makes compromises between how other people “actually” appear and the stereotyped expectations dictating how they ‘should’ appear,” noted Freeman and team.

The U.S. briefly fluidity and ambiguity in racial classification when it adopted a “mulatto” category for the U.S. Census between 1870 and1920.

Saperstein and University of Oregon’s Aaron Gullickson noted that people categorized as “mulatto” in one census were re-categorized as Black in the next census, particularly when Southern men’s occupational status changed “downward” between censuses.

Like clothing, another non-racial factor – cause of death – influences racial classification, and can bias official U.S. statistics, according to Penner and UC Irvine colleague
Andrew Noymer with Saperstein in their analysis of a representative sample of U.S. death certificates.

They controlled for existing statistical reports by interviewing decedents’ next-of-kin regarding cause of death and racial classification.

These findings are another example of interaction between changeable indicators of social status and seemingly fixed characteristics like physical appearance of race – both in forming perceptions of others and in defining oneself.

-*How have you adjusted your self-categorization based on occupational role and status over time?