Increased connection between brain hemispheres has been considered essential for creative problem-solving and creative expression:  Previous research reported a relationship between the size of the corpus callosum connecting brain hemispheres.

However, a more nuanced understanding of brain structure is needed, based on contradictory findings from Cornell’s Dana W. Moore, collaborating with Rafeeque A. Bhadelia and Carl Fulwiler of Tufts and Suffolk University’s Rebecca L. Billings and David A. Gansler, teamed with University of Florida’s Kenneth M. Heilman, and Kenneth M.J. Rood of Boston University.

Results from the Torrance Tests of Creative Thinking (TTCT) explained almost half of the variance in creative achievement, measured by quantity of publicly-recognized innovative accomplishments and ratings by judges of each participant’s three most significant creative work products in research by Indiana University of Connecticut’s Jonathan Plucker.

However, they found no significant relationship between the right hemisphere’s white matter volume (WMV) and creative production in divergent thinking tasks. 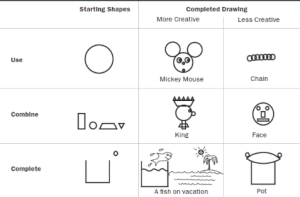 Creativity and brain structures seem to have a reciprocal relationship:  The brain’s structure is reflected in creative performance, and can be changed by training in visual art.

In addition, participants showed increased divergent thinking and use of model systems, processes, and imagery, but not perceptual abilities.

These findings indicate that neural pathways are adaptable or “plastic” to enable creative cognition and perceptual-motor integration.

-*What do you do to change your brain function?