-*Is handwriting passé in the Digital Era?
-*Has keyboarding eclipsed pen and paper?

Berninger’s team conducted brain scans and found that the brain’s thinking, language, and “working memory” regions are more activated when handwriting letters than when typing.

This change in brain activation occurs because handwriting letters generally requires more than one sequential stroke, rather than selecting a letter key during typing, according to Berninger.

With Isabel Gauthier of Vanderbilt University, she showed alphabet letters to children before and after they received letter-learning instruction.

Participants who practiced printing by hand showed more enhanced and “adult-like” the neural activity than those who had simply looked at letters. 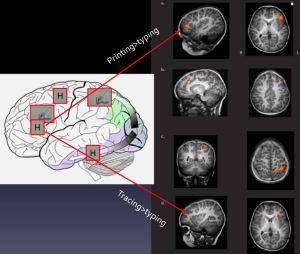 James suggested that adults may show similar neural activity benefits when learning a new graphically-different language, such as Mandarin, or symbol systems for mathematics, music and chemistry.

Steve Graham, now of Arizona State University, with Michael Hebert, now of University of Nebraska, demonstrated that handwriting is still associated with improved classroom performance, even when most classrooms and students type on computers.

Besides enhancing academic achievement, writing can be a coping tool, according to University of Chicago’s Sian Beilock.
She reported that bright students managed test anxiety by writing about their anxieties to “off-load” them.

The team confirmed that those who performed well on the math problems said that they did not have math anxiety, whereas low performers said they were anxious about math performance.
A less expected finding was that both high performers and low performers had the stress hormone, cortisol, in their saliva.

Although both groups experienced measurable stress, the performance outcome was mediated by the calm or anxious “mindset,” suggesting that performance can be enhanced through managing anxiety and expectations.
Writing by hand helped participants boost performance by reducing anxiety and freeing  working memory to focus on the math problems.

-*How often do you use handwriting and printing instead of typing on a keyboard?

4 thoughts on “Cognitive Value of Handwriting in the Digital Era”